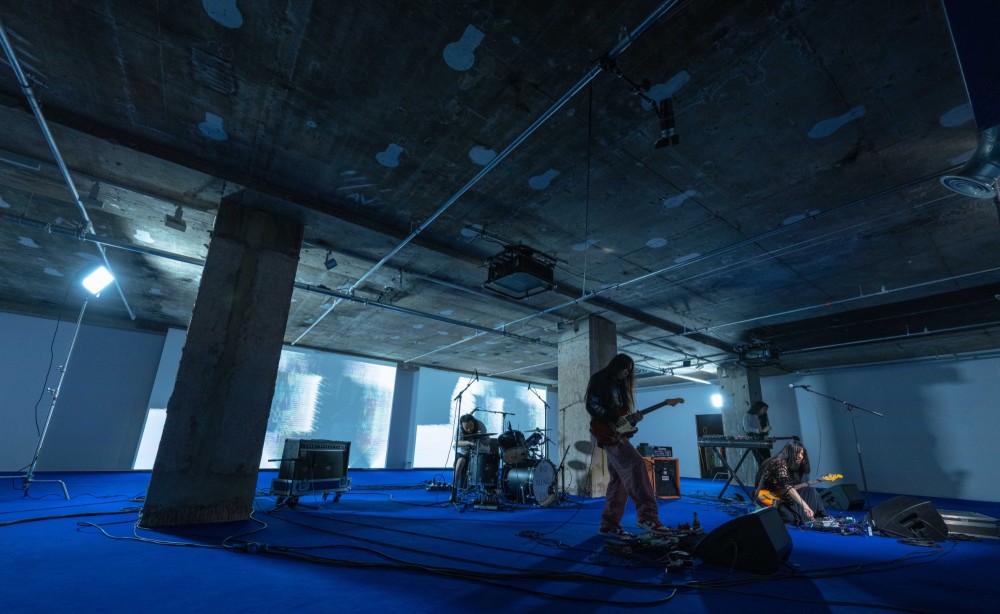 A live set from the consistently inventive Japanese band with visuals from London-based artist Noriko Okaku.

For the latest in our ongoing series of live sessions filmed behind closed doors by Fact at 180 The Strand, we invited Japanese band Bo Ningen to perform music from their recent album Sudden Fictions. Comprised of vocalist and bassist Taigen Kawabe, guitar and synth player Kohhei Matsuda, guitarist Yuki Tsujii and drummer Akihide Monna, Bo Ningen have been creating noisy, psychedelic rock music since 2006.

We all felt simply amazing and grateful [to be playing],” Taigen says of the set, which includes four tracks from Sudden Fictions, an album that sees the band exploring rich new sonic territory. “Performance is the way we can balance out our input and output, purification to fix the position of our spirit and body into where it should be.”

Bo Ningen use a huge variety of effects pedals (and an Arturia Microbrute synth, played by Kohhei) to add electronic texture to their music. “Using the effects pedals is like learning instruments or also composing,” Taigen says. “You could be lead by music theory or your hand/finger behaviour or you can lead them to be yourself. The pedals are the same, It’s easy to get trapped that it ends up sounds like just the sound of the pedal, not you or your sounds. So I try to make sure to use pedals to extend my sounds/characters and any potential I have.”

“I’m using a Delay (Roland/RE-20) and a Vibrato (EarthQuaker Devices/Aqueduct Vibrato) to extend my voice length/phase and characters. For bass guitar, I use Fuzz (Tym/Big Mud Civil War) as a low/sub booster, Preamp (Sansamp/Bass driver) as the root of my bass tone, Reverb (Levitation/EarthQuaker Devices) to extend the tail, Tremolo (BOSS/ PN-2 Tremolo/Pan) for wobble, and Uni-vibe (EarthQuaker Devices/The Depths) as a secret sub-bass booster which is always ON. “

Kohhei’s Gibson SG90 guitar is fed through a setup formed from years of touring, including staples such as the Moog MF Ring and Boss BF2 Flanger. “I used to have much bigger pedal board, but kind of got weary of carrying it around, so I shrunk it and now have only absolute ones,” Kohhei says. “I like pedals that are elemental. More chance of invention with elemental things. I don’t want people to go like ‘Oh this guy is using that pedal’, I want people to hear the music.”

Yuki’s setup is even more stripped back, with just an Empress Tremolo 2 pedal, Earthquaker Devices Bit Commander (“It’s basically a hard-edged mono synth, but also a neat distortion with octaves,” Yuki says) and Avalanche Run stereo delay and reverb device. “It’s a new addition to my rig but already in love with this machine. I used it all across the set,” Yuki says.

Monchan, who also uses a Roland SPD-SX sampler alongside drums, utilises a Moog MF-108M Cluster Flux, “to put a pinch of weirdness, to thicken the sample sound and wobble a bit.”

The set’s visuals are a combination of existing material and a collaboration between London-based visual artist Noriko Okaku and Kohhei. “Footage used on the first and second track are from our previous music video, elemental animation and actual live footage from years ago are combined to produce kind of ghost imagery, ghosts dancing behind us,” Kohhei says. “I hope it works as a manifesto that we keep updating ourselves without ever forgetting what we were before.”

“For the last tune ‘Kyutai’, Noriko Okaku provided collage animation from her previous project,” Kohhei says. “We were going through her stuff to see what fits the song and this one looked as if it’s made for it. Ominous and deep repetition of hands flowing in the dark matches perfectly with the song’s crawling groove.”

Bo Ningen are currently working on a film soundtrack, which will be released next year. “We can’t tell what it is yet but it’s something we’ve never done before in the format of a record,” Yuki says. “We’ve just finished recording and already sounding huge. Quality 100% guaranteed.”

Sudden Fictions is available now on Alcopop! Records. Bo Ningen have also been releasing a trove of rarities across the year through their Bandcamp.