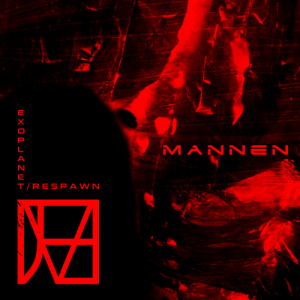 Mannen is the solo project of producer and composer Lucas McCaffrey. Based in Las Vegas, Nevada, McCaffrey draws influence from industrial, electronic music, metalcore, and post-rock. His career was initiated during high school when he played drums for several local bands, simultaneously enrolling in various educational programs to expand his musical knowledge. His soundtrack obsession became larger than life when he studied audio and film production at Middle Tennessee State University. This eventually led him to create Mannen, as well as his business Invisible Labyrinth Productions during his final semester of college in 2019. After gaining some infamy for covering Bring Me the Horizon, Mannen began to release work outside of that realm.

Aside from the covers and a remix he did for Virtual Self, Mannen’s debut is the double titled “Exoplanet / Respawn”. The first track on the double, ‘Exoplanet’, gives ambient producers a serious run for their money in the first thirty seconds. I could envision myself within a spacecraft staring at a seemingly peaceful ecosystem as the light synths encouraged my imagination. After this thirty-nine second intro, a light thumping beat with curious sci-fi synths continued to work me over. Light metallic twangs made their appearance, and it was at the one-minute and nineteen second mark that Mannen introduced riff-inducing guitars to the formula. My only complaint about the song is that around the two-minute and ten second mark, Mannen brings in these warped and high-pitched synths playing alongside the riffs. They are extremely annoying and I cringed every time they came up on the song; I even turned down my headphones on some occasions.

‘Respawn’ kicks in with a tribal beat, as if an army is preparing for war. The thick percussion slams brought me into that violent mood, and the build-up to the heavy guitars that reminisced a galloping horse was wonderful. This then transcends into a cinematic and brutal layer of cybernetic metal twists and further sci-fi synths.

To say the very least, Mannen definitely has something special going on with their project. While there is room for improvement on ‘Exoplanet’, I can’t find any complaints on ‘Respawn’. I kind of want to see what Mannen could do if he just tackled ambient or dark ambient alone, as the intro on ‘Exoplanet’ is phenomenal. Nonetheless, Mannen has a great start to his career and I can’t wait to see what else he will do in the future. Seven out of ten!