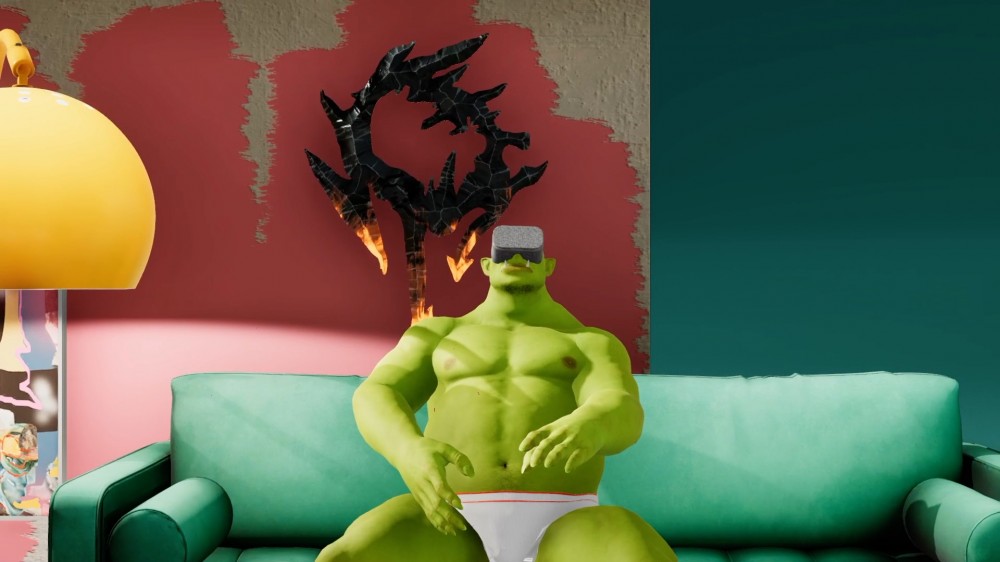 Theo Triantafyllidis presents a nightmarish vision of the metaverse that is part live simulation, part experimental theatre, drawing as much from The Sims as it does Lars Von Trier’s Dogville.

“Imagine if you could be at the office without the commute,” enthused Mark Zuckerberg in the 2021 keynote announcing his company’s leap into the metaverse. “You would still have that sense of presence, shared physical space, those chance interactions that make your day, all accessible from anywhere.” In this vision of the future, virtual reality has been transformed into a fresh vector for data commodification and online shopping, a means of transcending the pesky limitations of physical objects and our corporeal forms from Meta’s infinite expansion into every facet of our lives. “The metaverse will remove many of the physical constraints we see on commerce today and make entirely new businesses possible,” he promises. Ork Haus is artist Theo Triantafyllidis‘s response to this promise, a nightmarish vision of the metaverse in which the truly monstrous aspects of working from home and the technology that continues to enable us to do so are the subject of a work that is part live simulation, part experimental theatre, drawing as much from The Sims as it does Lars Von Trier’s Dogville. “Whether we like it or not, being in the new media art scene you are very, very close to Silicon Valley culture,” asserts Triantafyllidis. “In some ways we are doomed as artists to be running behind whatever new platform Facebook decides to roll out. I’m trying to be critical of these technologies and expose both the nonsensicality and complete impracticality of some of these ideas. Being familiar with this technology for a few years now it was very transparent to me that a lot of the things that Mark Zuckerberg was presenting in the Meta presentation were very, very far from being realized, even with their resources.”

In Ork Haus, the titular ork family struggle through a Web3-enabled purgatory of their own making, driving each other mad in an eternal work-from-home nightmare that evokes all the pandemic neuroses and anxieties of the last two years. “The whole simulation is based on the logic of a Sims game,” explains Triantafyllidis. “Each of the characters has their own needs, like hunger, fun and bladder, that they have to respond to over time, but depending on which of the characters are next to them when they are doing these actions, the actions will be affected and they have to interact with the other characters. At the same time, conceptually this whole thing is a very horrifying version of the metaverse, where this entire family is working from home, in a forever locked-down situation. The dad is dabbling in some crypto investments and trying to run a small crypto rig in their bedroom, that’s also used for heating. They’re caught up in this hustler, entrepreneur, Web3 family life.” Randomly generated vignettes convey the comic tragedy of the ork family’s precarious situation, resulting in chance encounters from which it is possible to piece together a rough narrative. The Y-front sporting patriarch delivers brutal corporal punishment to an orkling as we see familiar weapons from Radicalization Pipeline hanging on a wall of the family home, a sly nod to the multi-platform gaming applications many cite as the primary use case for NFTs. The ork father warms himself by the flames of his overheating crypto rig as one of his orklings teaches themselves to code; the ork matriarch desperately attempts to meditate as her husband snores beside her; daddy ork gets lost in his VR headset as another orkling tries on a dress in the bathroom where, moments later, daddy ork sits weeping as the tap drips next to him.

These moments of technologically mediated ork domesticity, though in many ways mundane, are elevated in their monstrousness to symbols of the contemporary human condition, experiences that are just as sisyphean as the eternal war of Radicalization Pipeline, but brought much closer to home via shared metaversal truth. Though voiced with crude grunts and snarls, each of the orks is capable of subtitled human speech via banks of quotes compiled by the artist and distributed between the family as part of a rudimentary dialogue system. Partially written by Triantafyllidis himself, partially cribbed, fittingly, from Zuckerberg’s Meta keynote and partially generated using the GPT-3 neural net language model, which was fed a selection of academic white papers and sitcom scripts, the dialogue of Ork Haus phases in and out of intelligibility, occasionally cohereing into an exchange resembling an irate family dispute, before falling back into nonsense, the parroted maxims of tech press releases and cryptocurrency forum dwellers. “Monster Theory is an interesting way of trying to understand the human condition and psyche through exaggeration, seeing how you can use physical appearance as a way to communicate interior feelings, finding these vectors and extrapolating them to the extreme,” says Triantafyllidis. “For me, it’s a more scientific method of examining things, where by extrapolating and exaggerating you can get deeper into understanding some things.” In Ork Haus, the monstrous is the mundane, the intensely dysfunctional family dynamics and their torturous living situation transcending their ork flesh into something profoundly relatable. “I guess it’s similar to the Simpsons in some way,” suggests Triantafyllidis. “You make a cartoonized, exaggerated character and then it somehow becomes more relatable than making a specific decision about body type or race, making the situation more universal, oddly enough.”

However it is the emotional and, in some instances, racial stereotypes that orks have represented historically that drew Triantafyllidis to the characters in the first place. “Orks have specifically been very fascinating for me,” he explains. “They were definitely popularized by the fantasy genre and it’s interesting that they have been used as this default enemy, cannon fodder thing in Lord Of The Rings, but in World Of Warcraft and Warhammer there are a huge amount of players that actually prefer being orks. There’s this interesting shift in the perception of them, so it’s interesting to try to play with this misconception. Lord Of The Rings presents them as the enemy in a very racist way and their aesthetic treatment in Warhammer is still pretty racist, but in Warcraft and in later games the popular understanding of them is starting to shift and we’re starting to see them having a more developed culture of their own.” This development can be observed in relation to Radicalization Pipeline. While Ork Haus features familiar weapons and some shared combat animations, rather than pure aggression we see instances of laziness, vanity, frustration and joy as the family goes about its day, a more complex, though ultimately just as horrific, infinitely repeating routine as those embroiled in an eternal war. Another radicalization pipeline, just by a different name. “I like to examine where this ork culture is coming from and what it’s referencing in terms of real life cultures,” continues Triantafyllidis. “One thing I truly relate with them on is that they’re always presented as making these very crude but efficient war machines, which is related to this idea in modernist architecture of form following function. This is a pretty common trope in design, but seeing how the interpretation of this by orks comes with these very funny results makes it much more relatable.”

It was this common ground that, in 2018, led Triantafyllidis to choose an ork as his artistic alter ego. “I spent quite a few months in virtual reality, looking at myself in the virtual mirror, looking down at my body and really trying to become this character, to change my movement, my speech, the way I was thinking, to see how that would mess up with my perception of self and the perception of my body, and how that would then, in turn, affect the type of work that I was making,” he describes. In a self-described effort to queer the ork aesthetic, Triantafyllidis’s avatar is a butch-femme ork with blue hair and aggressive pretensions of grandeur, whose testosterone-fuelled art practice is underlined by very literal heavy lifting. In Painting, the artist’s ork avatar creates a painting in virtual reality with digital paint splatters, scribbles and bold, violent lines, a painting that was reproduced physically for his show Role Play, which took place in 2018 at the Meredith Rosen Gallery in New York City. In the same series, the ork avatar constructs a statue to the ancient greek goddess of victory, Nike, out of sci-fi junk in the middle of a virtual studio, filled with digital objects painstakingly designed by Triantafyllidis. This dichotomy, between the very real work of making digital objects using design software, and the performance of virtual work carried out by Triantafyllidis’s ork avatar, is borne out in Ork Haus, where the notion of physical labour is subverted not only in the online entrepreneurial drive of the ork family, but in the form of the live simulation, in which, through the application of formidable technical skill, Triantafyllidis can sit back and let his work simulation as artwork run for as long as the computer has electricity. It’s a hilarious interrogation of the realities of what Mark Zuckerberg describes as an “embodied internet,” as well as an incisive critique of the monstrous potential of what the Meta CEO describes as “the creative economy we’ll all build.”