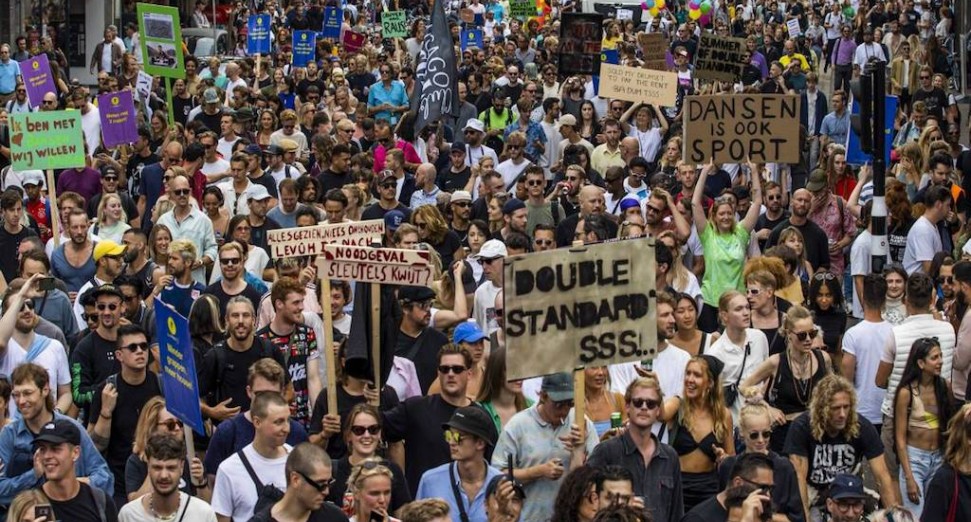 Around 70,000 people took to the streets across six Dutch cities this past Saturday for the Unmute Us protests.

The Unmute Us campaign was founded in response to the Dutch Government’s closure of clubs and large-scale events, such as festivals, until 31st October. Those heading the campaign and taking part in the protests marched with a demand that events instead be permitted without restrictions from 1st September, referring to similar events taking place without restrictions in the UK and other parts of Europe.

Saturday’s protests took place in Amsterdam, Eindhoven, Groningen, Nijmegen, Rotterdam and Utrecht, with DJs playing out of moving vans and soundsystems along the march routes.

Initially scheduled to run from 2pm until 5pm, most protests continued into the evening, with officials in Amsterdam calling for people to stop joining the route by mid-afternoon due to overcrowding fears.

Under the Dutch Government’s current COVID-19 restrictions, only one-day events with a maximum of 750 visitors are permitted, and attendees require proof of vaccination, a recent negative test result or proof that they’ve recovered from the virus within the last six months.

Clubs and festivals had resumed in the Netherlands, largely without restrictions, from late June, but a sharp increase in COVID-19 cases last month saw the government reintroduce a number of measures. One music festival in Utrecht was linked to 1,000 new cases of the virus.

Reinier Zonneveld in Amsterdam today for the @awakenings Unmute us protest pic.twitter.com/fJi5CFcd5n